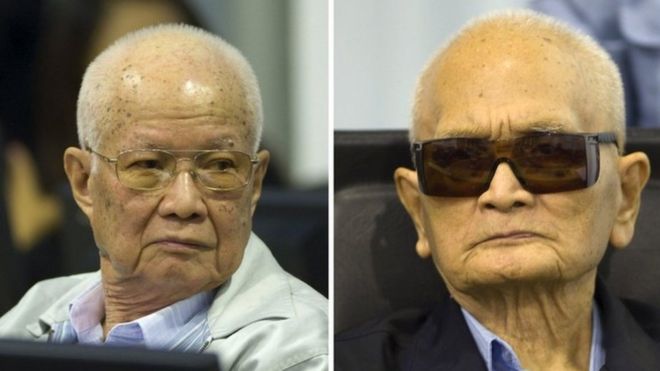 For the first time, two leaders of the brutal Khmer Rouge regime in Cambodia have been found guilty of genocide.
Nuon Chea, 92, was the deputy of regime leader Pol Pot, and Khieu Samphan, 87, was head of state.


They were on trial at the UN-backed tribunal on charges of exterminating Cham Muslims and ethnic Vietnamese.
The guilty verdict is the first official ruling that what the regime did was genocide, as defined under international law.
Up to two million people, most of them ethnic Khmer, are believed to have died under the brief but systematically brutal Khmer Rouge regime between 1975 and 1979.
But the BBC's South East Asia correspondent Jonathan Head says the larger-scale killings of the Cambodian population do not fit the narrow international definition of genocide, and have been prosecuted instead as crimes against humanity.
The two men - already serving life sentences for crimes against humanity - have again been sentenced to life.
They are two of only three people ever convicted by the tribunal, which has faced criticism for its slow pace and for being subject to alleged political interference.
Judge Nil Nonn read out the lengthy and much-anticipated ruling to a courtroom in Phnom Penh full of people who suffered under the Khmer Rouge.
They were found guilty of a long list of additional crimes including forced marriages, rape and religious persecution.
But the landmark moment came when Nuon Chea was found guilty of genocide for the attempt to wipe out Cham Muslims and ethnic Vietnamese Cambodians, and Khieu Samphan was found guilty of genocide against the ethnic Vietnamese.

Why is the genocide verdict significant?

The Khmer Rouge's crimes have long been referred to as the "Cambodian genocide", but academics and journalists have debated for years as to whether what they did amounts to that crime.
Although Cham Muslims and ethnic Vietnamese died in large numbers, the UN Convention on Genocide speaks of "intent to destroy, in whole or in part, a national, ethnic, racial or religious group".
So prosecutors at the tribunal tried to prove that the Khmer Rouge specifically tried to do that to these groups - something some experts, including Pol Pot biographer Philip Short, say they did not.
During the trial, a 1978 speech from Pol Pot was cited in which he said that there was "not one seed" of Vietnamese to be found in Cambodia. And historians say that indeed a community of a few hundred thousand was reduced to zero by deportations or killings.
Apart from being targeted in mass executions, Cham victims have said they were banned from following their religion and forced to eat pork under the regime.
The verdict today may not end the debate completely, but victims groups have long waited for this symbol of justice.
"They brought suffering to my relatives" 72-year-old Cham Muslim Los Sat, who lost many family members, told the AFP news agency at the court. " I am really satisfied with the sentences."

Who were the Khmer Rouge?

Led by Saloth Sar, better known as Pol Pot, the Khmer Rouge was a radical Maoist movement founded by French-educated intellectuals.
They sought to create a self-reliant, agrarian society: cities were emptied and residents forced to work on rural co-operatives. Many were worked to death while others starved as the economy imploded.
During the four violent years they were in power from 1975 to 1979, the Khmer Rouge tortured and killed all those perceived to be enemies - intellectuals, minorities, former government officials - and their families.
The scale and brutality of the killings - many of them meticulously documented by officials - means the regime remains one of the bloodiest of the 20th Century.
The regime was defeated in a Vietnamese invasion in 1979. Pol Pot fled and remained free until 1997 - he died under house arrest a year later.

Why is this tribunal controversial?

This could be the final decision of the tribunal, officially called the Extraordinary Chambers in the Courts of Cambodia (ECCC).
Established in 2006 with both Cambodian and international judges, it has so far only convicted three people for the atrocities of the Khmer Rouge regime at a cost of $300m (£232m).
In 2010 it convicted Kaing Guek Eav, also known as Duch, who was in charge of the infamous Tuol Sleng torture centre and prison in Phnom Penh. He is serving a life sentence.
Former Khmer Rouge foreign minister Ieng Sary was a co-defendant with Khieu Samphan and Nuon Chea but died before judges delivered a verdict in the first of the two sub-trials in 2014. His wife Ieng Thirith, the regime's social affairs minister and the fourth co-defendant, was ruled mentally unfit to stand trial and died in 2015.
Although there are cases against four other Khmer Rouge members, Cambodian Prime Minister Hun Sen has been vocal about his opposition to the tribunal starting any new trials and there is little chance this will happen.
A former mid-level member of the Khmer Rouge regime himself, he says his people want to move on and that further prosecutions could lead to violence.
The Khmer Rouge waged an insurgency after they were toppled from power, although thousands defected to the government in the 1990s before the group disbanded completely in 1999. There are parts of the country where victims and perpetrators live side by side in villages.
But many Cambodians pay little attention to the tribunal, and young people in particular are keen for their country to be known for something other than the "Killing Fields". - BBC
Posted by www.Nepalmother.com at 6:30 AM