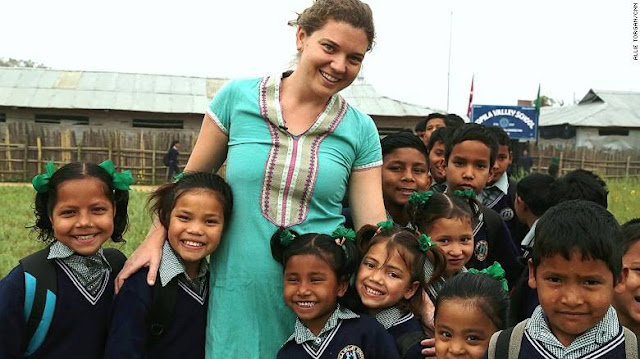 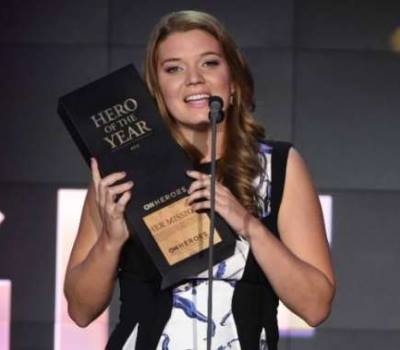 
New York (CNN)Maggie Doyne, a New Jersey woman who used her babysitting savings to change the lives of hundreds of Nepalese women and children, was named the 2015 CNN Hero of the Year on Tuesday at a star-studded awards ceremony in New York.
A decade ago Doyne's backpacking trip to Nepal transformed into a long-term commitment. Spending $5,000 in savings from her babysitting days, Doyne bought land and worked with the community to build a school, a women's center and the Kopila Valley Children's Home. Doyne's BlinkNow Foundation supports these efforts.
"If you had told me when I turned 18 that I was going to be the mom of 50 kids, I would have told you that you were totally crazy. And I am. And to my kids, I love you so much. Don't ever forget how much I love you," Doyne said Tuesday. "And to the country of Nepal, thank you so much for loving me and accepting me as a daughter welcoming me into your country.
"And to all of you in this room and who are watching, please, please remember that we have the power to create the world that we want to live in, just as we want it. And that's what all the Heroes here have done tonight." 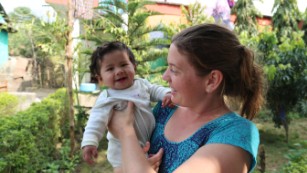 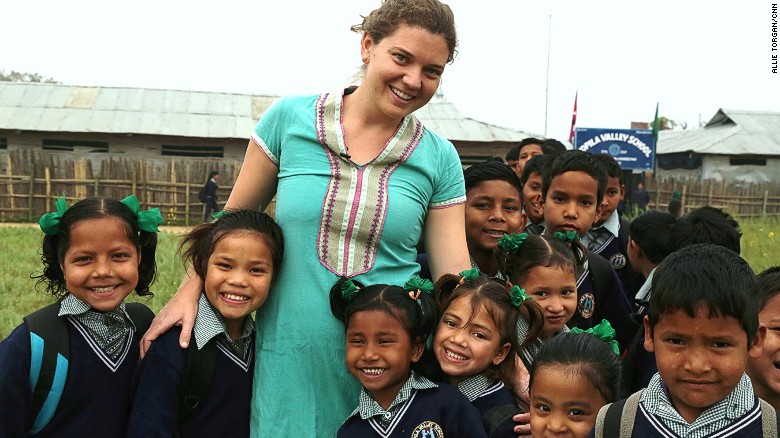 Doyne worked with a community in Nepal to build the Kopila Valley Children's Home.
Hosted by CNN's Anderson Cooper, the show included presenters Neil Patrick Harris, Taylor Schilling, Common, Kelly Ripa, Kathy Griffin, Sharon Stone, Chris Noth and Zachary Quinto.
During the ceremony, celebrity presenters joined each Top 10 Hero on stage as they shared the personal stories about what inspired them to give back to society. Musical performers included singer Andra Day, who performed her inspiring anthem "Rise Up."
The event's global premiere is set for December 6 on CNN.
CNN Heroes
For more about CNN Heroes, go to CNNHeroes.com
Supporters of the Top Ten CNN Heroes may make direct charitable donations to their designated nonprofits by using Amazon Payments through December 31.
Since 2006, CNN's Peabody Award-winning, Emmy-nominated franchise has profiled more than 250 Heroes and has received more than 50,000 nominations from more than 100 countries.
As part of their award package, each Top 10 CNN Hero will also receive organizational training through the Annenberg Foundation, a global supporter of nonprofit organizations. All 10 Heroes will participate in customized versions of the Annenberg Alchemy program, tailored to help grow their individual organizations.
Nominations are open for next year's CNN Heroes at CNNHeroes.com.
Like Doyne, this year's nine other Top 10 CNN Heroes also have remarkable stories to tell.

For more than 20 years, Dr. Jim Withers has taken his medical practice to the streets of Pittsburgh, offering free, quality health care to the homeless.
To win their trust, Withers used to walk the streets dressed like a homeless person, rubbing dirt in his hair and muddying up his clothes. He would search for those who needed medical attention but might be too suspicious of him otherwise. It was important for Withers to connect with people who wouldn't seek him out. Instead, he reached out to them.
"I was actually really shocked how ill people were on the street," Withers said. "Young, old, people with mental illness, runaway kids, women (who) fled domestic violence, veterans. And they all have their own story."
Withers' one-man mission became a citywide program called Operation Safety Net. Since 1992, the group has reached more than 10,000 individuals and helped more than 1,200 of them transition into housing.
He also started the Street Medicine Institute, a nonprofit that helps communities worldwide establish programs of their own. 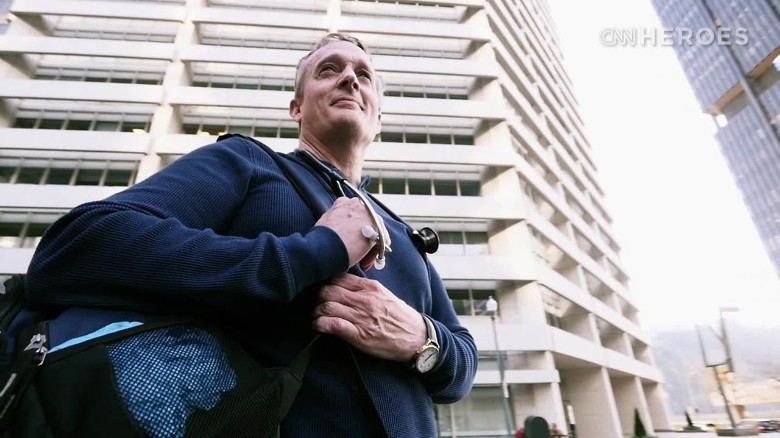 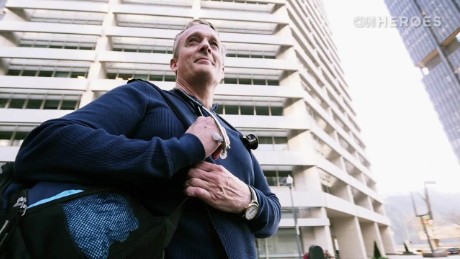 Monique Pool has dedicated herself to helping wild animals in the South American country of Suriname. Pool has rescued, rehabilitated and released hundreds of sloths and other mammals back to the rainforest.
It all started in 2005, when Pool's dog went missing. During her search, she called the Animal Protection Society and learned that a baby sloth had been orphaned. Pool offered to take it in.
"I didn't know anything about sloths, but I learned a lot," said Pool, who sought advice from international experts on how to care for the animals.
Today, Pool's nonprofit, Green Heritage Fund Suriname, helps protect sloths and implement other conservation efforts in the country. Her home serves as a temporary sanctuary for the mammals, and she is now a recognized local authority on them. Her work has earned her the nickname "The Sloth Lady." 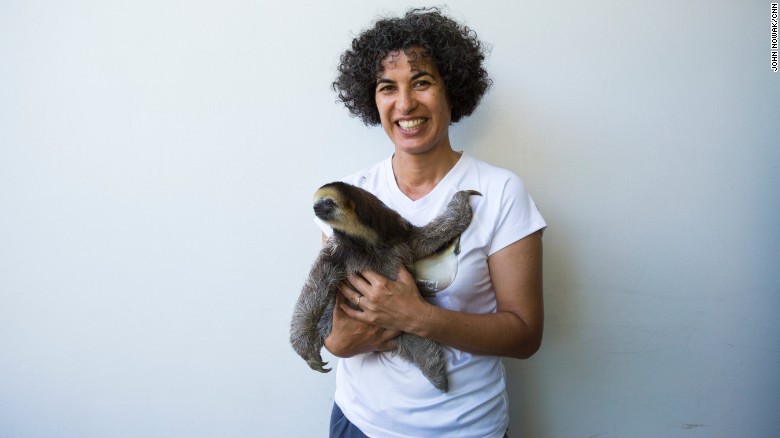 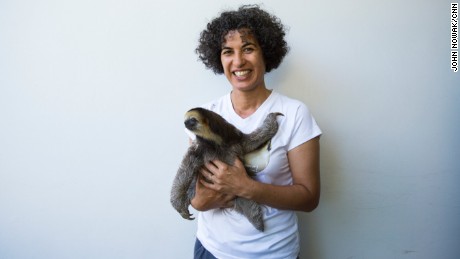 Richard Joyner: Turning a 'food desert' into a bounty

In rural Conetoe, North Carolina, Richard Joyner has brought a bounty of food to what was a nutritional desert. Joyner, a local pastor, started a community garden after watching many of his parishioners die from preventable diseases. "Diabetes, high blood pressure -- when we first got started, we counted 30 funerals in one year," Joyner said.
Today, his nonprofit, the Conetoe Family Life Center, manages more than 20 plots of land, including one 25-acre site. More than 80 local young people help him plant and harvest nearly 50,000 pounds of fresh food a year. Local residents receive some food for free, and students raise scholarship money by selling the food to restaurants and grocery stores.
The children also learn how to cook the food in a nutritious way, steering their families toward better choices at home. As a result, many people are now reaping the benefits of Joyner's ideas. Emergency room visits are down, and the community as a whole is healthier. 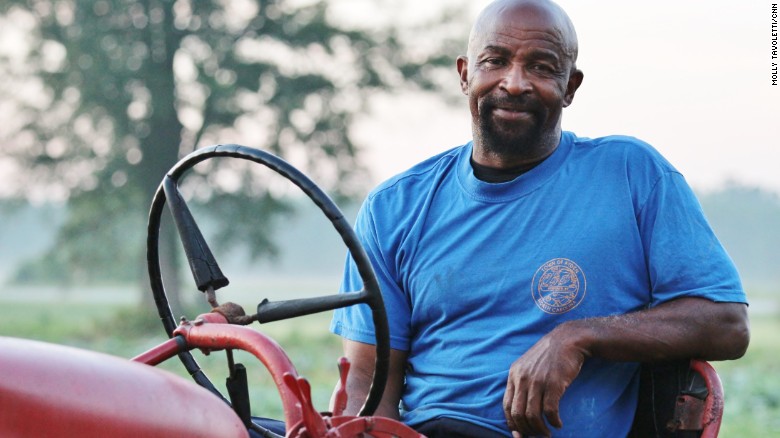 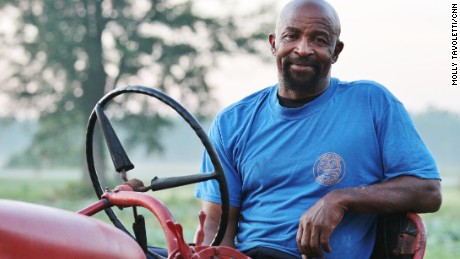 Sean Gobin: 'Walking off the war'

Iraq and Afghanistan combat veteran Sean Gobin's nonprofit, Warrior Hike, has a unique way to help combat vets process their troubling war experiences. Gobin calls it "walking off the war." The idea came during a 2012 hike along the 2,168-mile Appalachian Trail. "Hiking eight hours a day, I was processing all of these experiences that I had put away," said the Charlottesville, Virginia, native. "And I knew that there were other combat veterans that needed to do that."
Warrior Hike provides combat veterans with all the equipment and supplies they need to complete long-distance hikes throughout the country. Ranging from two to six months, these journeys give veterans a chance to connect with nature and work through their issues while enjoying the camaraderie and support of other war veterans. 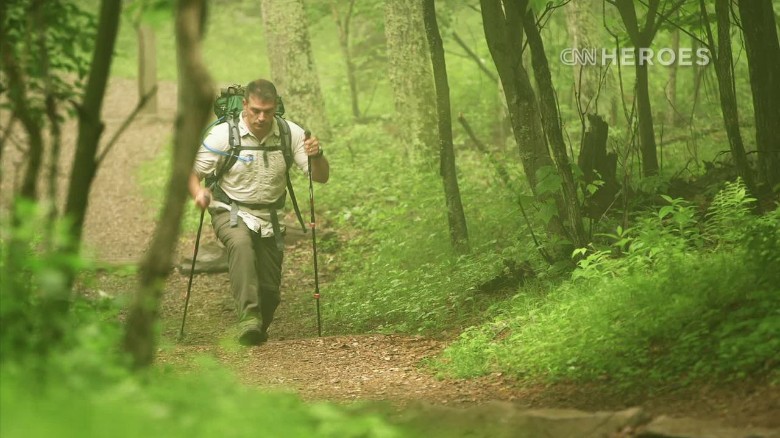 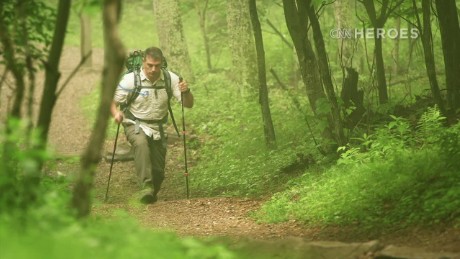 For CNN Hero Bhagwati Agrawal, it was a water crisis in his homeland that spurred him to act. His nonprofit, Sustainable Innovations, created a rainwater harvesting system that now provides life-changing, safe drinking water to more than 10,000 people across six villages in the driest region of India.
California's record-breaking drought has made news, but in Rajasthan, water scarcity is a way of life. Women and children walk miles to get water and clean dishes with sand to conserve it. His system, called Aakash Ganga -- Hindi for "River from the Sky" -- is a network of rooftops, gutters, pipes and underground reservoirs that collect and store the monsoon rains, which fall from July to September.
The system frees adults to spend time doing more valuable activities. Not having to fetch water allows children, especially girls, to spend more time in school. People report fewer health problems. Dairy cows have become twice as productive.
"The way I look at it, I'm 70 years old," Agrawal said. "I only have maybe 10 years left of active life. Right now, I'm like Usain Bolt, the sprinter. ... And I will run very fast to accomplish this mission." 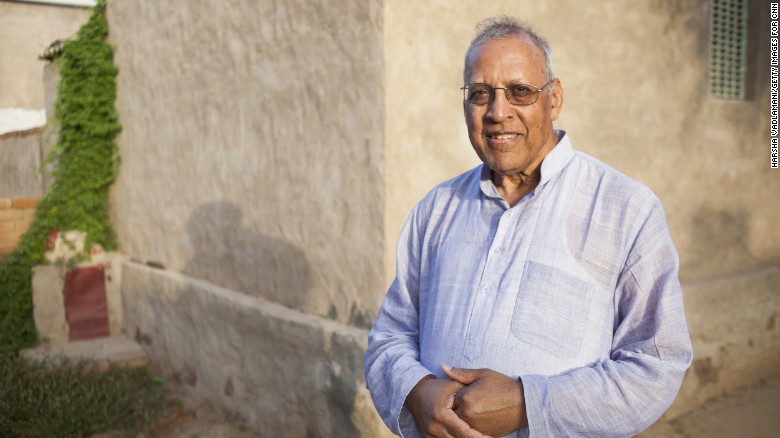 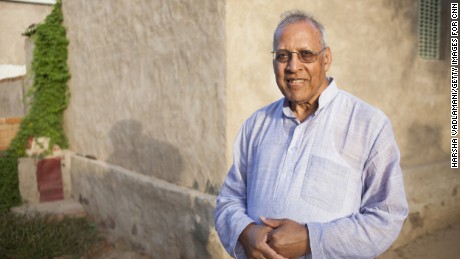 Kim Carter of San Bernardino, California, cycled in and out of incarceration and homelessness until she decided it was time for a change. Now, her nonprofit, Time For Change, helps hundreds of women in similar circumstances reclaim their lives. The group provides housing, counseling and job training, as well as services to help women reunite with their children.
"Homeless women and children -- I call them invisible people. We pretend that we don't see them," Carter said. "But I see them. And I know there's something we can do to help them."
Since 2002, more than 800 women -- many of them formerly incarcerated -- have benefited from Carter's program. 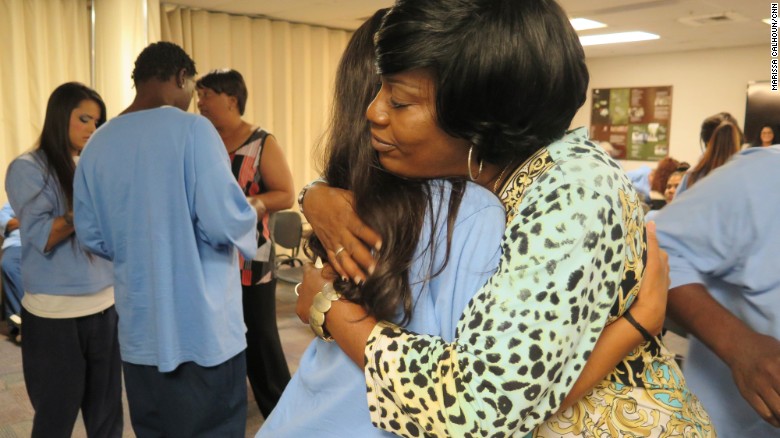 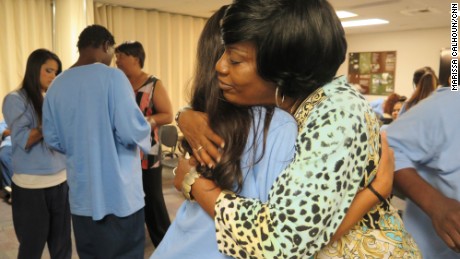 Growing up, Rochelle Ripley spent her summers listening to her grandmother's stories. Her grandmother, a full-blooded Lakota, taught her about their culture and the struggles faced by the people. Before her grandmother died, she asked Ripley to do one thing: Go home and help their people.
Today, Ripley is fulfilling that promise. Through her nonprofit, hawkwing, she has delivered an estimated $9 million in services and goods to the Lakota people.
Ripley's group helps those in need with employment, safe housing and healthy food.
Four or five times a year, Ripley makes the trip from her home in Glastonbury, Connecticut, to South Dakota's Cheyenne River Sioux Reservation. Working alongside the tribe, she and volunteers run a food bank and provide free health services, home renovations and educational opportunities. 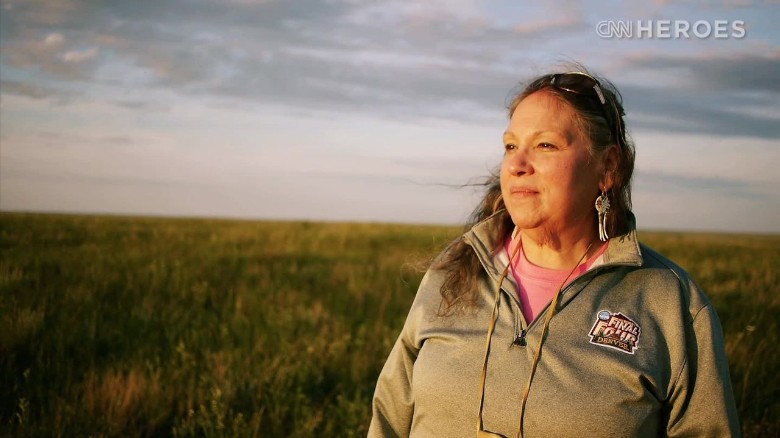 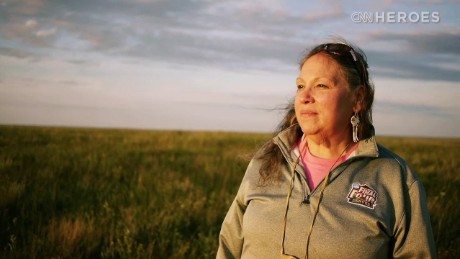 For single parents, dealing with cancer offers its own set of challenges. Jody Farley-Berens saw the need firsthand when her childhood friend faced that situation.
"Making ends meet is insurmountable," Farley-Berens said. "There are so many doctors' appointments, copays, surgeries, prescriptions. And then the inability to work -- any savings that there may have been is gone very quickly."
She did all she could to help. After her friend's death, Farley-Berens helped start a nonprofit dedicated to assisting others in similar circumstances.
Since 2006, Singleton Moms has provided practical, financial and emotional support to more than 300 parents in the Phoenix area. 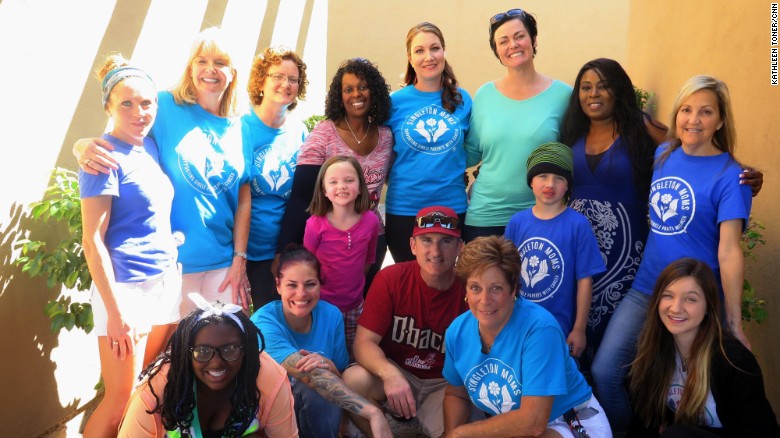 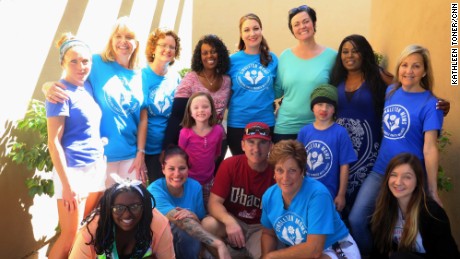 In Chicago's troubled neighborhoods, Dr. Daniel Ivankovich saw countless people struggling to get medical treatment because they were underinsured or didn't have any insurance at all. They were put on wait lists for months, even years, just to receive basic procedures, and their injuries got worse.
"I thought to myself, 'this is happening in America?' " he said.
So Ivankovich vowed to treat patients regardless of their ability to pay. In 2010, he co-founded the nonprofit OnePatient Global Health Initiative.
Today, Ivankovich runs three clinics in Chicago and performs more than 600 surgeries a year. He says more than 100,000 people have benefited from the program.
"I know I can't fix everybody," he said. "My goal is to be the battering ram to help break down the barriers to get these patients the care and the resources they need." 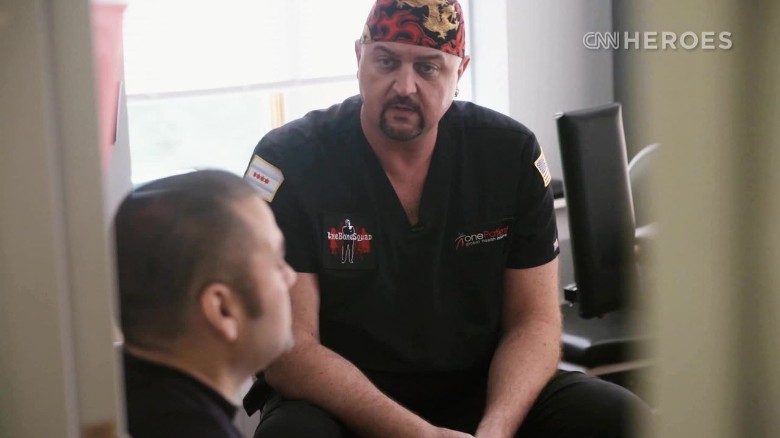 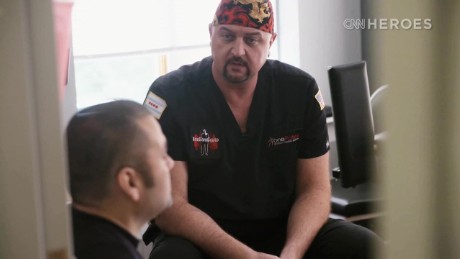