The envisioned Defense University and its rationale - Suresh Sharma 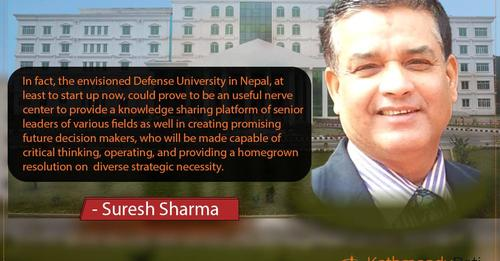 All countries have their own defense organizations, defense related academic institutions, higher defense education systems which are invariably geared to their national security needs based on their geo-strategic environment. The senior executive government officials of every nation are needed to understand national security in a holistic manner so that their framing of strategies, policies and regulations are always in line of national security framework. And, at times they will be able to alert the political masters in case if they think in a reverse approach detrimental to national interest.

Although with our constitutional provision of National Security Council ( NSC) ,which is considered as a highest defense organization, and its composition made of political masters and highest military professional in the council looks decent theoretically , in managing national security issues, but remains weak ,especially due to members of the Council of Ministers ever changing. However, the national security issues are hard pressed discussions among the NSC functional secretariat officials on daily basis, due to the permanently assigned capable teams but there also lacks larger discourse due to manpower shortage ( even though NSC can hire experts) to work in various standing committees ( as observed in other nations) able to have all issues examined . In our NSC , the civilian staffs and the four security agency officials that would roughly ‘make a good 15 above first class officers’ , and other officers level of 20/25 are the only assets to examine issues ,analyze and produce deductions , but project weak as compared to other such organization in the neighborhood. So comparing the envisioned Defense University with others at this moment may be similar of this kind due to various reasons.

Academic institutions like, Defense Universities, if not Defense Colleges can be a direct or indirect feeder to the higher defense organization in many context. Think tanks, research institutes, universities including independent scholars and intellectuals contribute to the thesis required for national security perspectives.

With the working teams of fellow experts of different fields in the university which takes up instruction projects through joint training capsules would develop ideal civil military relation in a great extent. The national executive officers trained in own Defense University would definitely bring a pragmatic constructive high yield change with their strategic thinking of national need and character.

In fact, the envisioned Defense University in Nepal, at least to start up now, could prove to be an useful nerve center to provide a knowledge sharing platform of senior leaders of various fields as well in creating promising future decision makers, who will be made capable of critical thinking, operating and providing a homegrown resolution on diverse strategic topics. For instance, the Pentagon in US , which is also the epicenter of steady civilian oversight of the military, a great capable work force with civil- military composition produce thesis for serious national security policy objectives which are apparently adopted by their political masters. For us, imagining a rightful composition of civil- military work force in our Ministry of Defense of such kind will still be an outlying dream.

The Man on Horseback: The Role of the Military in Politics, a book written by Samuel E. Finer and The Role of Military in Underdeveloped Country, a book edited by John J Jonson point out few interesting things in common. One, the potential military intervention in politics, due to causes, courses and consequences; Two, the stress of such resulting military influence or pressure in formulating national policy, and Three; that even when the armed forces are professional and accept civilian supremacy, the general political atmosphere often creates the motive, mood, and opportunity for military intervention. We will just examine one such instance of US engagement in Vietnam in 60s. US president J F Kennedy declared Guerilla wars required “ a whole new kind of strategy , a wholly different kind of force, and therefore a new and wholly different kind of training “, but his view was contradicted by the erstwhile Army Chief of Staff, who asserted that “ any good soldier can handle guerillas”. Later on, there happened a disreputable withdrawal of US troops due to Viet Congs’ relentless pressure on these bleeding “good soldiers” ( Edward E Rice, Wars of the Third Kind : Conflict in Underdeveloped Countries, p 2 )

Likewise, the mood for military intervention emerges from political grievances and the military’s organizational superiority, which leads to disrespect for civilian jurisdiction, blaming the government for political failure and providing the pretext to intervene. Just as the opportunity for military intervention is fostered by the civilians’ undue reliance on the military, especially during a crisis, it is also supported by the public in opposition to government decisions (Finer, Man on Horseback, p23–72.)

An ex defense ministry official writes in his article piece that in order for the civilian masters to reign supreme, they need be experts in their respective fields hold much water in the need of training them in defense colleges/or universities . Apparently a joint secretary or any equivalent officials ( Senior civilian officers from various ministries, Army, Nepal Police , Armed Police Force and NID and possibly from semi government institutions ) to   acquire their expertise and knowledge sharing through a common highest instructive platforms would make them efficient in strategic thinking and policy level executive roles, thereby strengthening the Civil military relations.

Recalling the above paragraphs of military interventions, the NDU trained policy makers and the educated political masters in future will understand the real quintessence of “Guarding the Guardians” and will not disrespect the political system (or constitution) and prevent the country from plunging into disarray.

The GoN has already issued the ‘Defense University and Development Board Formation Order 2019(2076)’ and a lots of progress has been made in establishing the university at Perungedanda in Kavre district .The ongoing work on National Defense University could be one step ahead to fill the void of a higher defense educational institute in Nepal, primarily in developing the intellectual capacity and professional competency of national human resource which would now be able to chalk out workable national strategy, shape well the management and administration system.

We can hope that the new infrastructure development in the commissioning of a defense university would be free from these challenges:

Perungedanda has the connotation of a hill feature. Hence, in future, the location should not restrict an university’s instructional, administrative and recreational infrastructure prospect, including other requisite logistical units nearby, so as to standardize with international institutions, and stand out as a preferable learning place for foreign participants .

The dedicated instructional human resource must be guaranteed both in terms of quality and quantity.

There would be a requisite logical number of quotas in the course annually which may itself be a challenge due to shortfalls in various ministries. Other officials attending the course are not incentivized as military officers for the course is not a promotion criterion for them. A regular participation of such category of officers may emerge as a challenge.

The budgetary outlay to the university may be conspicuous due to its heavy expenditure required for sustainment of course, that includes funds for air transportations, foreign study tours ( both foreign and inland ), and the funds required for resident nature of course, including several other administrative and logistical footprint.

To maintain and standardize the institution capable of accommodating foreign participants in reciprocal exchange programs would be a new challenge which would encompass all above.

The common platform like NDU will avail senior leaders (including political) the opportunity for sharing a whole of government approach (synergy) in diverse national issues. The interagency intellectual vigor will create innovative human resource that in long term contributes to nation building.

Posted by www.Nepalmother.com at 1:33 PM