The parties have become the savior of impunity, and a safe haven for criminals and terrorists ! 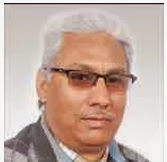 - Rajan karki : Chief Editor- Gorkha Express Weekly, Kathmandu
Where is the country’s politics heading for? Have you any idea?
The parties have become the savior of impunity, and a safe haven for criminals and terrorists. The nation which purifies the anti social and undemocratic forces, such a nation is bound to become a Jungle regime. The sovereign people have the right to pounce upon the anti-people elements but this sovereign right of the people have gone into the hands of the four party syndicate as if it were their private properties
Even after the formation of the new government led by Chief Justice Khil Raj Regmi, the general population doesn’t appear that much pleased? Why so?
If the political parties have divided the nation on ethnic, language and religious lines then concurrently the State organs have become lethargic due to over politicization. So how the people could become happy when this hapless and helpless government has just come about as if it were the workers of the four party consortiums? It has been more than twenty four days of the Regmi government in office yet he has not made any address to the nation. The government which remains answerable to only four parties how can the people become happy? Instead, the people appear to be in a mood to erupt like a volcano anytime soon
being tired of the ones who have become the synonymous of mal-governance.


In the absence of nationalism, media and democracy while going together, what is being observed in the process is that the aspect of nationalism is being ignored? If nationalism is in a wakened state then where to keep the media and nation’s democracy? This is a burning question now confronting us all. For example, there is media in , There is awareness in with a democratic system remaining intact. But unfortunately, the independent prior to what it was in 1975, doesn’t exist at the moment.
Posted by www.Nepalmother.com at 11:41 PM