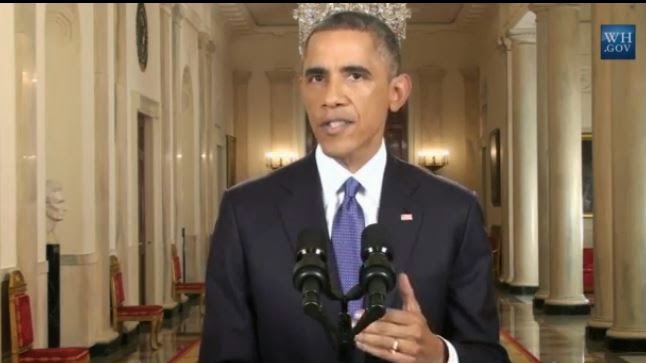 President Barack Obama is ordering the most sweeping overhaul of the immigration system in decades, despite Republican claims he is overstepping his power by unilaterally moving to shield five million undocumented immigrants and prioritizing the deportation of "felons, not families." Obama rejected accusations by conservatives that he is offering a free pass to undocumented immigrants and
argued in a prime-time address that "the real amnesty" would be leaving a broken system as it is now. "Today our immigration system is broken and everybody knows it," Obama said. "It's been this way for decades and for decades we haven't done much about it." Obama laid out the changes he is making to immigration laws without the consent of Congress. A key element of his plan is to instruct immigration authorities to prioritize expulsion action against gang members, felons and suspected terrorists rather than law-abiding undocumented parents of U.S. citizens and residents and others. The changes will offer those who qualify the chance to stay temporarily in the country for three years, as long as they pass background checks and pay back taxes. But they will not be offered a path to eventual citizenship or be eligible for federal benefits or health care programs. And, in theory, the measures could be reversed by a future president. "If you meet the criteria, you can come out of the shadows and get right with the law. If you're a criminal, you'll be deported. If you plan to enter the U.S. illegally, your chances of getting caught and sent back just went up," Obama said. The President argued that ordering a mass amnesty would be unfair but mass deportation would "be both impossible and contrary to our character."
Posted by www.Nepalmother.com at 7:47 PM