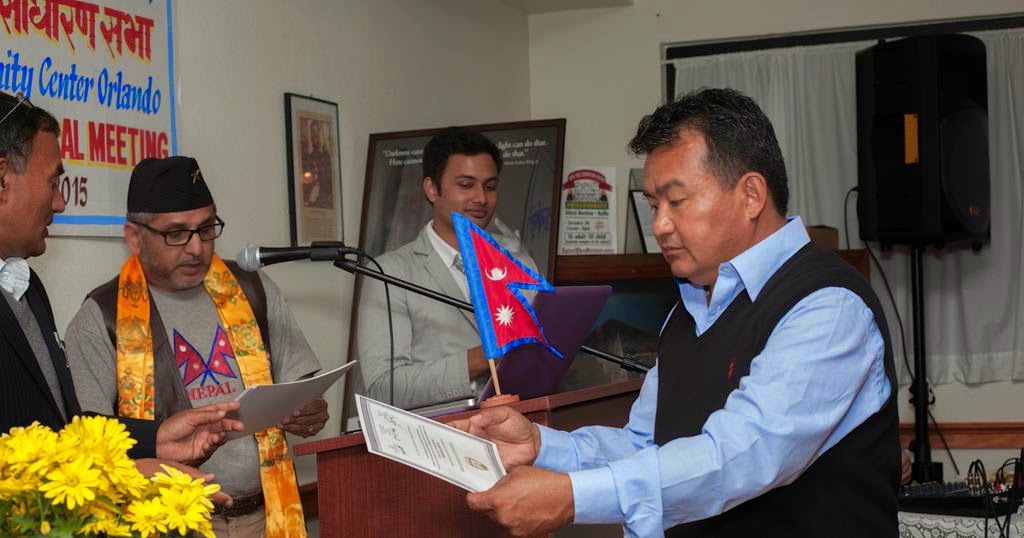 Among the dignitaries called in Dias were INLS Florida Chapter’s Former President Dr. Bidya Raj Subedi as the chief guest, Chief Election Commissioner/NASeA Executive Vice President Bimal Nepal, United FNA-FANS President Bikash Devokota, NSA @ UCF President Takat Rawal together and NCCO Director/NOA-FL Chapter Adviser Rajendra Shrestha were among the special guest during the event. More than hundreds individuals and family members gathered during this event. Outgoing Vice President Hari Om Pradhan welcomed all the dignitaries and participants to the event and expressed the importance of Nepali Community center in Orlando, the first of its kind in Florida.
Please tour the following link to get the glimpse of the entire event:
http://dhanphotos.com/phpAlbum/index.php/NCCO-3RD-AGM-ORLANDO-FLORIDA-2015
Two hours long program ran very smoothly with NCCO business hours and Triveni Sahitya Sangam (TSS) literary and cultural event going side by side which provided life to this event. As always TSS Artists performed their outstanding talents. Musical instrument was performed by Dev Rai presented heart Pounding tune of Nepali Folk song on his Flute (Bansuri) which made the evening more magnificent and Chetan Neupane assisted on madal, Crowd were cheering up on solo song performance by John Parajuli, Binu Pathak, Nijananda Malla and group song by Arati Rai, Laxmi Dhakal, Shrijana Dhungana, Ganga maharjan, Sharada Malla, Amita Devkota, Swojan Shrestha, Swojal Shrestha, Kushal Dhakal.
While the audiences were enjoying the singing part of the program, Durga Dhungana, Shiwali Shakya and Chetan Neupane made them all burst out their laugh loud by sharing their funny jokes. Literature, Poetry and Gazal didn't miss its part too; Nisha Baral, Bikash Devkota, Hari Om Pradhan, Bidhya Raj Subedi, and Srijana Nepal came up with their beautiful poems and Gazal to steal the heart of audiences.
During the NCCO business hours the first immigrant Nepali in Orlando, NCCO Director/NOA-FL Chapter Adviser Rajendra Shrestha recalls his memories of loneness and today he is proud to be the part of core team in this mission of building a Nepali Community center in Orlando. NSA @ UCF President Takat Rawal expressed the satisfaction towards the progress and expressed that the young generation will be thankful towards the NCCO and wish the mission to build the Nepali community center will be a success. Representing INLS Florida Chapter Regional VP Nagendra Dhakal expressed satisfaction towards NCCO’s activities and wished the new elected committee will further promote NCCO towards fulfilling its goals.
Representing Nepalese Association in Southeast America (NASeA) Executive Vice President Bimal Nepal wished NCCO a success in building first Nepali Community Center in Florida and expressed NASeA’s full support and cooperation in keeping our identity alive as Nepali here USA.  During the same occasion United FNA-FANS President/Director of Bikash Devkota briefly highlighted the importance of the Nepali community center in Florida and requests everyone to provide a constructive support and earn the ownership of the community center. President Devkota also thanked NCCO Founding President Krishna Bilash Pokharel for his great contribution towards establishing the 1st Nepali Community Center in Orlando, Florida. Poet Devkota also recited poem during this event.
NCCO Founder/outgoing President Krishna Bilash Pokharel briefly shared the historical accept NCCO from the day it started and all twist and turns his team had to face for the survival of NCCO since its birth. “It was hard to dig seed and grow a plant, but now its turn for another gardener to preserve the plant and make it a tree” - says Mr Pokharel.He further presented the financial report for fiscal year 2013-2015 and put an end to his speech by saying, “During this three year we gave our best for NCCO to bring it to this level and now it’s time to open the bridge to new members, give them the opportunity to experience work inside the organization formally as a team and take the responsibility equally, contributing their time and effort for Nepali over here. We wish them good luck” He further added today with everyone’s help and support NCCO financially stands strong having almost $20,000.00 in bank balance. During this occasion President Pokharel in presence of Chief Guest Dr. Bidya Raj Subedi, United FNA-FANS President Bikash Devkota in cooperation with NCCO Director Bimal Nepal distributed the letter of appreciation to all founders/outgoing officers of NCCO. During the same occasion President Pokharel recognized Mrs. Anita Thapa 1st place and Mrs. Amita Devkota 2nd place winner of Abikatel Memorial 5K run held in WBP on January 17, 2015.
Highlight of 2nd phase of NCCO AGM:
Chief Election Commissioner Bimal Nepal officially declared the NCCO election 2015-2017 and honored all the elected officers with certificate and delivered the secret oath of office. Commissioner Nepal extended thanks to outgoing President Krishna Bilash Pokharel and the EC team for their trust extended towards him to conduct historical NCCO Election 2015. Furthermore Commissioner Nepal thanked all Nepali community members of Orlando for extending full support in conducting free and fair election. After the oath taking ceremony he congratulated NCCO President elect Dhan Man Thapa Magar and all the officers for their eagerness to serve the organization.

Executive Members-elect:
Mrs. Arati Rai
Mr. Ramesh Adhikari
Mr. Siwali Shakya
Ms. Asmita Devkota
Mr. Shankar Gautam
President elect of NCCO Dhan Man Thapa Magar delivered acceptance speech and assured everyone that during his tenure he will provide consistency to all the task initiated by outgoing President Krishna B. Pokharel remarks promising to prove that this team will exceed the standard of work carried out by outgoing team and will be focused on raising maximum fund possible to accomplish mission of NCCO ‘To build a community center’. President elect Thapa Magar reinforced his commitment towards Nepali Community in Orlando and shared that his NCCO elected team will support INLS FL Chapter Orlando Regional Pathshala and all Triveni Sahitya Sangam (TSS) activities will continue as a part of NCCO monthly activities.
Chief Guest, Former President INLS FL President Dr. Bidya Raj Subedi addressed the audiences and thanked  NCCO outgoing President Krishna Pokharel and his team members for extending the invitation as a chief guest. He appreciated the initiation taken by the founders of NCCO and the Nepali Community in Orlando and all well-wishers of Florida for their commitment to build the 1st Nepali Community center in Orlando, Florida. He acknowledged that the fund raising task initiated by outgoing President Krishna Pokharel and his team members was very impressive during his tenure. Chief Guest Dr. Subedi extending his Congratulations to President elect  Dhan Man Thapa Magar and his team members expressed that President Thapa will take NCCO to a different height. Dr. Subedi spellbound the audience with his poem Nepali Community Center Orlando.
NCCO Vice President elect/ Coordinator, Triveni Sathitya Sangam (TSS) Nijananda Malla expressing  vote of thanks to all participants and reinforce the commitment that Triveni Sahitya Sangam (TSS) monthly episode will be the key literary event of the NCCO.
Information Secretary elect John Parajuli was the master of ceremony.
Thanks! 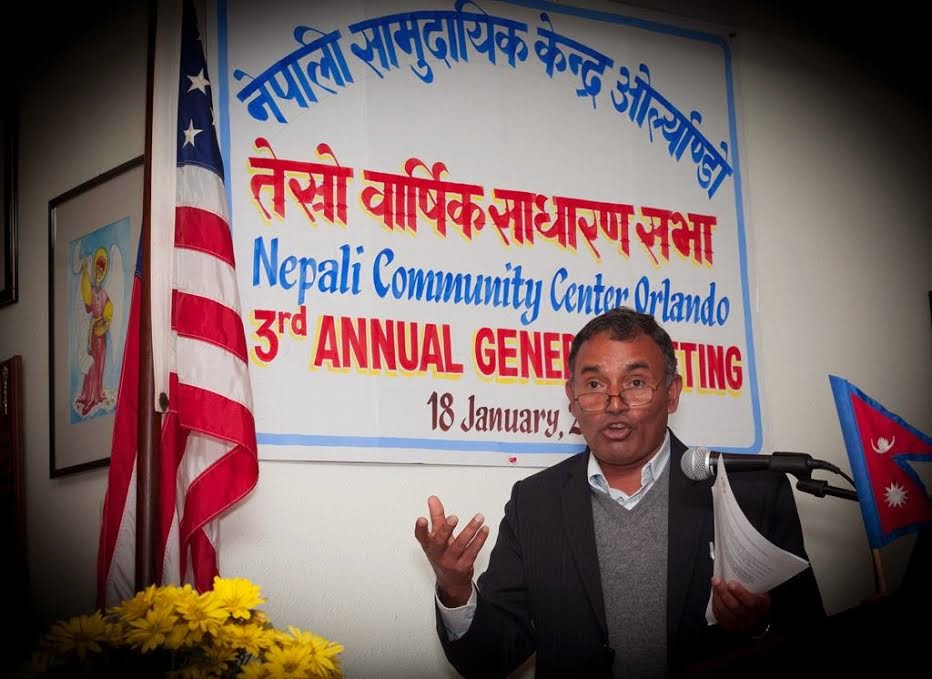 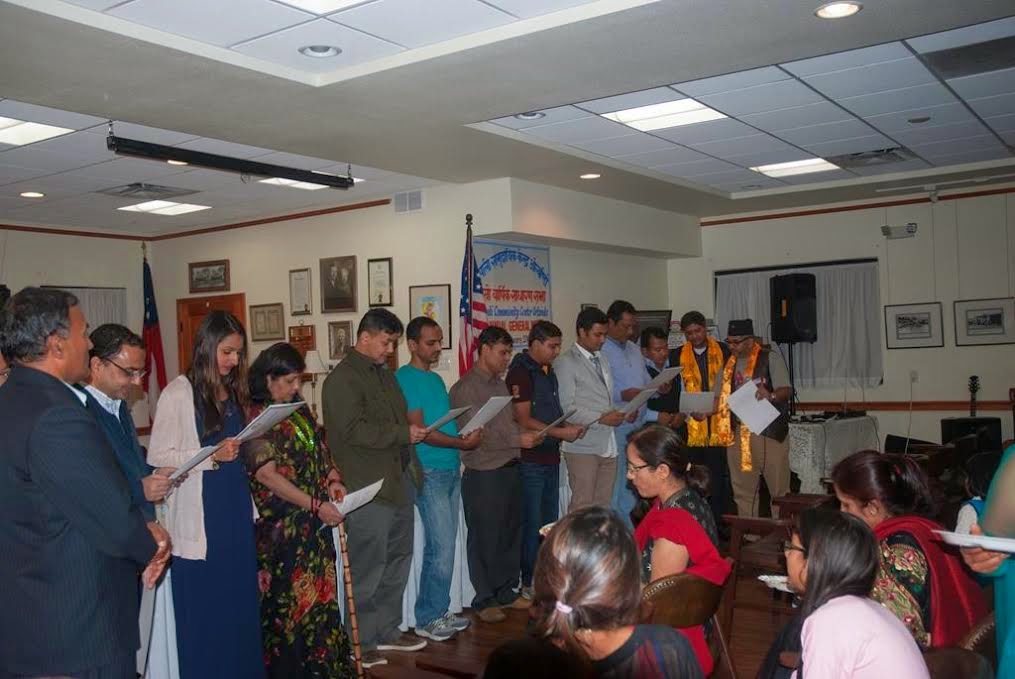 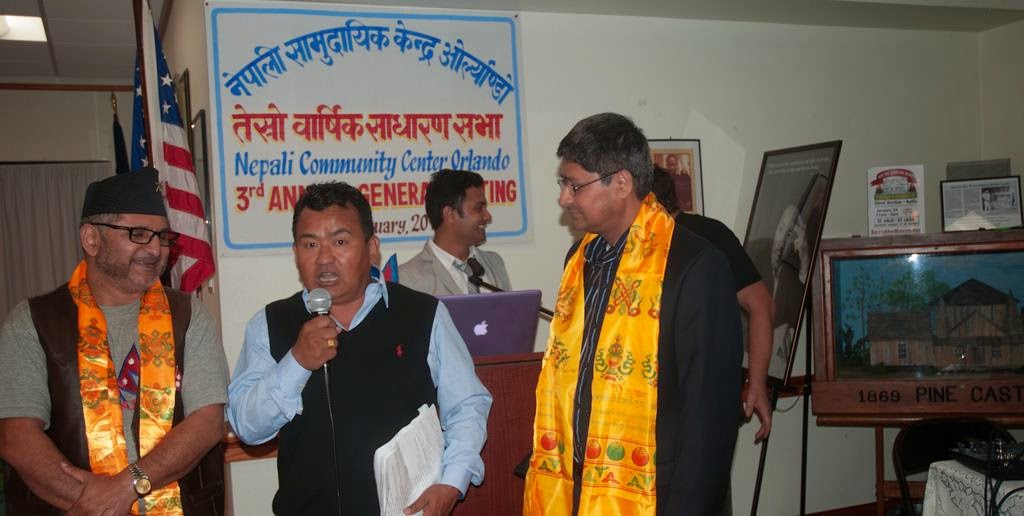 On behalf of NASeA's External Relations Committee together with  President Dr. Ram Chandra Baral and EC team members of NASeA,   I would like to congratulate NCCO President Dhan Thapa Magar and his team members for being elected officers of NCCO for the tenure 2015-2017. Please find the detail NCCO Press Release forwarded by NCCO Information Secretary John Parajuli attached with this mail.

NASeA is confident that with the able leadership of NCCO President Dhan Thapa ji and his team of excellence we look forward giving consistency to our close cooperation and partnership and together we will be the part of NCCO's mission in building the first Nepali Community Center in Orlando.

Please join me congratulating NCCO Founder President Krishna Bilash Pokharel together with all the founders and the outgoing officers for initiating a historical step in establishing the NCCO. Salute to you all founders of NCCO for keeping our joint mission alive in building Nepali Community center here in Florida.

NASeA' motto is to serve the Nepalese community here in  this region and beyond, we look forward to working with all our International/National/Regional/State organizations and share our best practices and build mutual  partnership to meet our common goals, always placing the Nepali community and our beloved country of origin Nepal First.

With this note, I extend my great appreciation to Immediate Past  President of NCCO Krishna B Pokharel and his team for giving me the opportunity to serve as Chief Election Commissioner of this prestigious organization NCCO Election 2015. 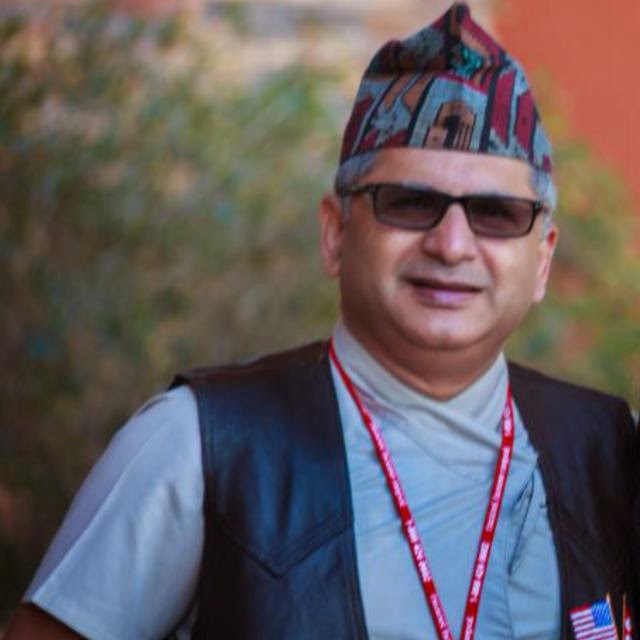 Respected Presidents of Nepali Organisations, Community members and well wishers here in Florida and beyond,
Greetings from NRN-USA!

Once a Nepali, Always a Nepali!

With due respect I encourage you all to be a member (Yearly membership fee per adult is only $10) of NRN-USA (Non-Resident Nepalese Association-USA).  If you are already a member now, I encourage you to renew your membership by Jan 31. With your valid membership you can contest the incoming NRN-USA election as a candidate and important of all you will officially secured your status  of voting.

Act now and spread the news:
Just 3-days to go please click the link and be a proud member of NRN-USA and be our  collective Voice:
https://nrnnccusa.org/nrn-registration-2015/

NRN-USA is the largest organization of people of Nepali origin in the United States and it officially represents the estimated (over) hundred-thousand persons of Nepali origin in the US. Its first democratic election was held last year and the response to it was overwhelming -- over four thousand people participated. This year, it is expected to be even a larger turn out.

One question may come to our mind as 'what would we get being a member of NRN-USA?'
Here are some responses:
1. Being a member you become a part of the part of the largest Nepali Organization in the US.
2. Your name will be published in the NRN website as a proud member.
3. You will be eligible to cast vote to send capable candidate to run the largest organization run by people of Nepali origin.
4. As opposed to a non-member, a member will have authoritative rights make your say in organization's activities.

5. The voice of Nepali living abroad will be louder and it will be heard to the lawmakers and policymakers in Nepal where you have stakes in property and assets.
5. And several other benefits mentioned in its website http://nrnnccusa.org

Once again, only 3-days to go  I encourage you all to be the proud member of NRN-USA.
Please follow  this link:

Always for the community,