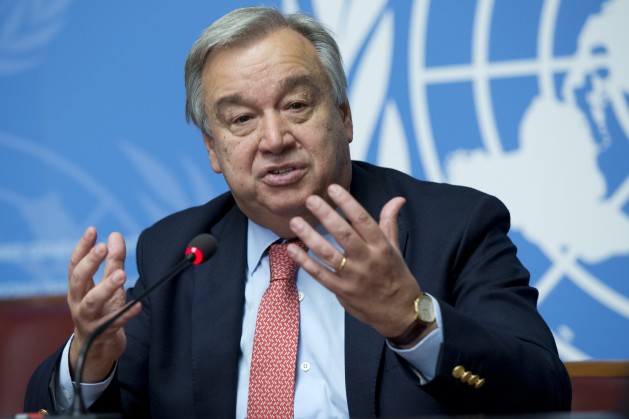 Lyndal Rowlands – Inter Press Service-IPS
The 15 members of the UN Security Council jointly announced Wednesday [5 Oct 2016] their decision to select Antonio Guterres of Portugal as the ninth Secretary-General of the United Nations.
“We have a clear favourite and his name is Antonio Guterres,” Vitaly Churkin, Russia’s Permanent Representative to the UN and Security Council President for the month of October told media, flanked on either side by his 14 counterparts on the council.
Per UN tradition, the UN Security Council’s decision, to be formalised on Thursday, is
expected to be endorsed by the full 193 members of the UN General Assembly.

Antonio Guterres will be the ninth UN Secretary-General from January 1 2017. Credit: UN Photo/Jean-Marc Ferré.
However this show of unity from Security Council members comes at a time when diplomacy over Syria is at a new low with US Secretary of State John Kerry announcing earlier this week that Russia and the United States were suspending talks on Syria.
The ongoing conflict in Syria is just one of the many challenges that Guterres will face as the world’s top diplomat.
Fortunately many believe that Guterres is among those best prepared for the task, as shown through his performance in what has been the most open and transparent selection process of a UN Secretary-General to date.
Prime Minister of Portugal from 1995 to 2002 Guterres was later UN High Commissioner for Refugees from 2005 to 2015, during a time when the number of displaced people worldwide grew to its highest level since the end of the Second World War.
However Guterres’ selection has ultimately disappointed those who believed that the next Secretary-General should be the first woman to lead the international organisation or the first Eastern European to hold the job.
“Ultimately, the next UN secretary-general will be judged on his ability to stand up to the very powers that just selected him, whether on Syria, Yemen, South Sudan, the refugee crisis, climate change or any other problem that comes his way,” — Louis Charbonneau, Human Rights Watch.
While skipping the Eastern European rotation is a break with tradition, the inability to select a female candidate from seven highly qualified female contenders seems like an even deeper blow for an organisation which has long claimed to see gender equality as one of its central goals. However the gender break down of the Security Council itself, 14 men and one women, shows that for many UN member states gender equality is still a long way off. Guterres will also be the fourth European man to hold the position – although the first since 1981 – showing that Europe with just over 10 percent of the world’s population still has a firm grasp on global affairs.
Michel Gabaudan President of Refugees International who worked under Guterres at UNHCR told IPS that he was delighted that this year’s open selection process ultimately resulted in the selection of Guterres.
“I think we need a strong leader, we need a visionary leader and we need a diplomatic leader and I think Mr Guterres definitely has shown to have all of these qualities,” said Gabaudan.
“He brings countries together which is basically the job of the Secretary General so tremendous challenge ahead for Mr Guterres but I think the UN has selected the right person for that difficult job.”
Natalie Samarasinghe, Executive Director of the United Nations Association, UK and co-founder of the 1 for 7 Billion campaign told IPS that she believes that Guterres selection also reflects the success of this year’s improved selection process.
“The announcement today is testament to the impact of the more open and inclusive process for which 1 for 7 Billion campaigned,” Samarasinghe told IPS.
“Guterres was not seen as a frontrunner at the beginning of the race – “wrong” gender and region for starters – but was widely considered to have done well in his General Assembly dialogue and in other events, with many commenting on his experience and ability to inspire.”
The 1 for 7 Billion campaign has campaigned for improvements in the appointment of the Secretary-General, including calling for a single, longer term of office to remove the perceived pressures of pleasing the veto-wielding five permanent members of the Security Council – China, France, Russia the United States and the United Kingdom.
These perceived pressures were also noted by Louis Charbonneau, UN Director at Human Rights Watch.
“Ultimately, the next UN secretary-general will be judged on his ability to stand up to the very powers that just selected him, whether on Syria, Yemen, South Sudan, the refugee crisis, climate change or any other problem that comes his way,” noted Charbonneau.
However, like many others, Charbonneau also welcomed Guterres appointment:
“With Antonio Guterres, the Security Council has chosen an outspoken and effective advocate for refugees with the potential to strike a radically new tone on human rights at a time of great challenges.”
Guterres is considered likely to be a candidate willing and able to stand up for the voiceless at the UN. In April, he told journalists of how his experience volunteering with the homeless had inspired his career in politics.
The news of Guterres’ selection also coincided with the confirmation that the Paris Climate Change agreement has enough signatories to enter into force within 30 days. The important next stage of implementing the non-binding agreement will now fall to Guterres’ purview.
Guterres will replace outgoing Secretary-General Ban Ki-moon of South Korea.
Posted by www.Nepalmother.com at 8:14 AM